Register or Login
Cookie preferences
This website uses cookies, which are necessary for the technical operation of the website and are always set. Other cookies, which increase the comfort when using this website, are used for direct advertising or to facilitate interaction with other websites and social networks, are only set with your consent.
Configuration
Technically required
These cookies are necessary for the basic functions of the shop.
"Allow all cookies" cookie
"Decline all cookies" cookie
CSRF token
Cookie preferences
Currency change
Customer-specific caching
Individual prices
PayPal payments
Selected shop
Session
Comfort functions
These cookies are used to make the shopping experience even more appealing, for example for the recognition of the visitor.
Note
Statistics & Tracking
Affiliate program
Facebook Pixel
Track device being used
Language
Categories
Information

Discovered in 1803 by William Hyde Wollaston, he named palladium after the asteroid Pallas.
He found it in South African platinum ore in samples that were created by dissolving in aqua regia. The metallic palladium and palladium-containing alloys originate from the Urals, North and South America, Ethiopia and Australia. There, however, they are exploited, but are still extracted from nickel and copper ores. Palladium does not react with oxygen, unlike silver, for example, which means that it does not tarnish. If palladium is cold-worked, as for example in the production of Mokume Gane wedding rings and jewellery, its strength and hardness increases very quickly and becomes considerably harder than platinum.Palladium is much more reactive than the related element platinum, but nevertheless belongs to the precious metals. It dissolves in nitric acid. It dissolves slowly in hydrochloric acid with the addition of air. Palladium is comparable in its precious metal character with the periodically neighbouring silver. Thus, in many acids it shows itself to be the nobler metal. In hydrochloric acid, however, it is the less noble. 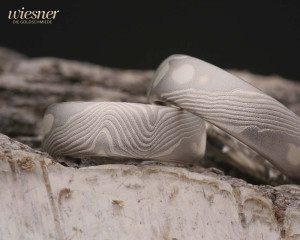 Mokume Gane wedding rings MGT18
€2,250.00 *
This website uses cookies, which are necessary for the technical operation of the website and are always set. Other cookies, which increase the usability of this website, serve for direct advertising or simplify interaction with other websites and social networks, will only be used with your consent. More information
Decline Accept all Configure